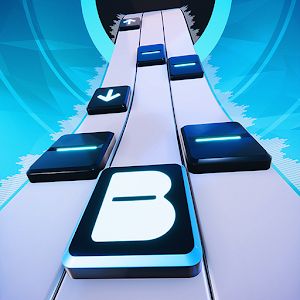 The gameplay is what lets down this game good potential. I noticed how great the UI is with all the animations. You start of thinking “Woah everything is so shiny” and unlocking a song makes you feel all tingly. Just another trademark of supercell

It starts out with good momentum, introducing gameplay elements, but then as you play harder levels and aim for better scores you start to notice how uphill it all is.

For one, phone screens with massive heat sensitivity, like newer phones, end up being a huge detriment to the note detection. The game will completely ignore notes if the monitor is slightly moist, even if the sweat from your hand isn't even visible. You can spend the premium currency of gems to continue. I did that once and I missed the note right after the one I paid to correct and lost again.

Meaning, some of you have to dry your hands mid-level if you want to do well. The song literally ends if you miss one note, and you either give up or pay more gems. It's also worth mentioning that you run out of space to store “card boxes” shortly reaching level 2.

The game uses it giving you free cardbox tokens per level attempt as an excuse to quickly fill up your 3 spaces so you feel obliged to unlock boxes instantly. And yes, once all your card box slots are filled, you are literally locked from playing any songs, not even for practice. Songs take longer and longer to unlock, which is reasonable, but holy hell does opening a box lose its charm quick.

Soon you'll beat all the songs you have in your collection it'll just be playing the song you hate the least for the nth time to get more card boxes. Then you come back after 3 hours, repeat the process until you unlock another song by Ariane Grande or something.

While it does occasionally treat you with free cards and instant unlock times via ads, it doesn't excuse the over-incentivisation for paying players. But that's just freemium games, I suppose.

Overall, it diverts from typical rhythm games enough for it to not feel like a typical rhythm game, so thats a plus. However, the frustration of dying because you missed a single note, has led me to the conclusion that this game is unsuitable for rhythm game enjoyers who just want to do combos to fast songs. It makes it a big deal when it was just one error that would've been normally overlooked in Japanese rhythm games

Good if you want a break from the FULL COMBO vibe, bad if you want to apply the same principles of what you know to this newer gameplay style