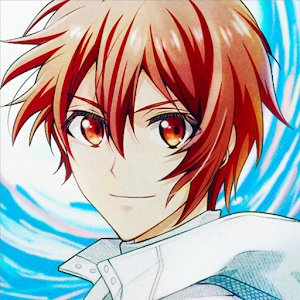 An absolutely stunning and wonderful game. It was my gateway to mobages, but I still haven't found one that satisfied me like this and it's been four years since I found it.

GRAPHICS: All of the art is super beautiful. I sometimes catch myself just staring at the background because its so pretty. The card art is also really beautiful.

SOUND: The music is very good and there is a lot of vareity. Some songs are extremly meaninful and impact the story in a large way like Sakura Message to being straight up catchy like Last Dimension. It has a fully voiced story by many amazing seiyuus like Kensho Ono and Wataru Hatano. As well as Yusuke Shirai's first major role, Yamato Nikaido.

GAMEPLAY: It's a very simple rhythm game that doesn't require a lot of skill. It's very simple, but very hard when you start playing expert and master difficulties.

STORYLINE: The story goes from being abs of steel hilarious to "I am going to cry about this for the rest of my life ohmygod". The characters are all charming in their own unique way, some are in overused archetypes but they grow throughout the story. There's also an anime that execute the Main Story extremely well that it's extremly worth watching.

Read Note
Get QooApp for Android